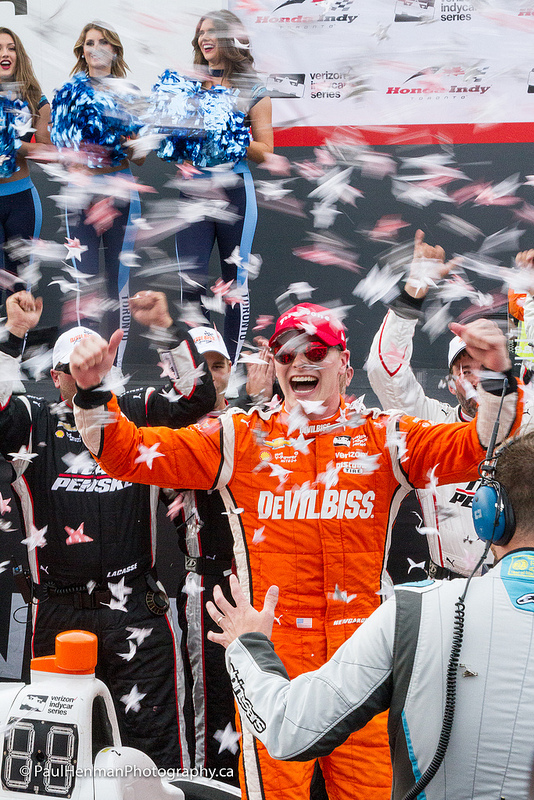 It’s hard to think far enough back to the first race that I watched on TV, but I remember going to Silverstone for the British Grand Prix in 1992 and seeing Nigel Mansell win in the Williams. His teammate, Riccardo Patrese, was second followed by Ayrton Senna and Michael Schumacher. (Yes that tiny photo is mine. Someday I should go through my old pics and re-scan at a higher resolution.)

I also remember being at Donington Park for the 1993 European Grand Prix, which is widely regarded as one of Ayrton Senna’s best races. Apart from the rain, what I remember most is Michael Schumacher going off into the gravel trap right in front of us and the crowd cheering.

I have written live notes (blog posts created while I watch races) since about 2008; you can find all my F1-related posts via the Formula 1 category filter.

Despite going to the British Grand Prix every year from 1992 to 1998, I’ve yet to go to the Canadian GP. I almost had a chance to shoot the Montreal race for Getty a few years ago but the plans fell through.

I went to the Honda Indy Toronto for a couple of years as a spectator and posted some of my through-the-fencing shots but I was invited to join HIT’s photo team in 2010. (I’ve moved my HIT notes to their own page.)

Not long after I passed my road test I had the chance to drive the Grand Prix circuit with John Watson Performance Driving School. Having just been taught lots of defensive driving techniques by a police driving instructor, adapting to the more aggressive racing style was challenging but a lot of fun.

A friend was unable to go to the McLaren Mercedes launch in 1997 so I jumped at the chance to attend. The official F1 site lists it as one of the most memorable car launches. It was certainly entertaining, with the Spice Girls and Jamiroquai performing but personally I would have been happy with more time spent with the car and drivers.

The other big motoring event I enjoyed was Goodwood Festival of Speed – I went in 1996, 97 and 98. It used to be possible to walk through the garages and paddock, chat with drivers (I remember meeting Stirling Moss, Jackie Stewart, and John Surtees) and watch them blast past with just a couple of hay bales between you and a race car going flat out!