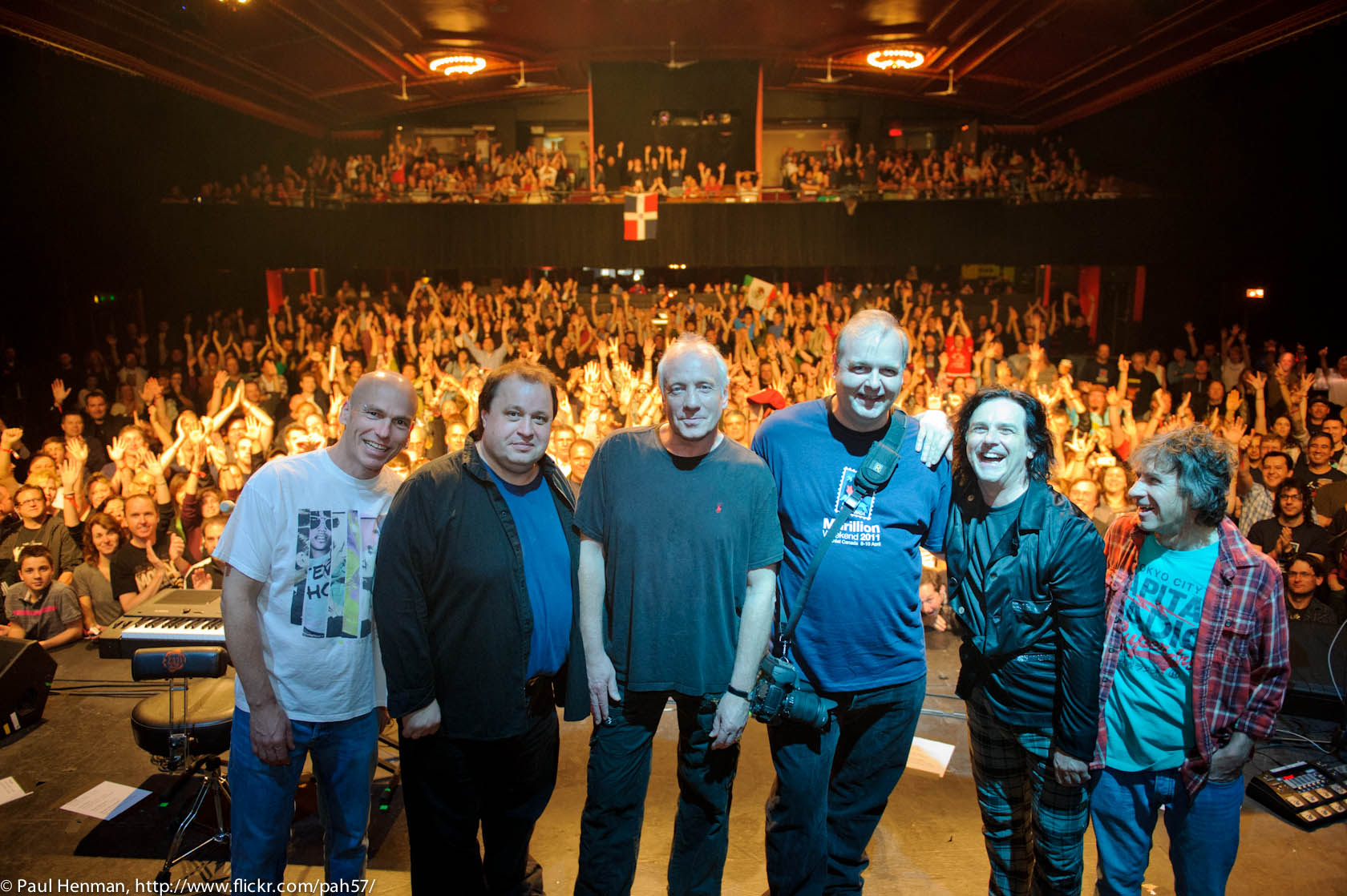 If you’ve read the list of bands that I’ve seen live, then you’ll probably notice that Marillion appears a lot 🙂

Marillion /məˈrɪliən/ are a British rock band, formed in Aylesbury, Buckinghamshire, in 1979. They emerged from the post-punk music scene in Britain and existed as a bridge between the styles of punk rock and classic progressive rock, becoming the premier neo-progressive rock band of the 1980s.
Marillion’s recorded studio output since 1982 is composed of twenty albums, generally regarded in two distinct eras, delineated by the departure of original lead singer Fish in late 1988 and the subsequent arrival of replacement Steve Hogarth in early 1989.

I first saw them in 1987, on the Clutching at Straws tour for their fourth studio album, back in the days when Fish was fronting the band. I recall him changing his trousers on stage having split the seam, but unfortunately I don’t remember much else of that gig. I still have a tour T-shirt somewhere but didn’t take any photos. [setlist]

I’m not sure why I lost touch for a while but fortunately Los Trios Marillos (Steve Hogarth, Steve Rothery & Pete Trewavas) came to Toronto in 2005 and played an acoustic set at the Mod Club. [setlist]
2009 was the first time we went to the Marillion Weekend in Montreal. The weekend covers three nights: Seasons End’s 20th Anniversary; One year, one song (a song for each year from 1987 to 2008); All Over 10 Minutes (14 epic length songs). [Blog post]

Two years later, the 2011 Marillion Weekend in Montreal coincided with my birthday so Kerri colluded with Lucy (the band’s manager) to get me up on stage with the band! The three nights were: Holidays in Eden; A-Z (a song for every letter of the alphabet … with a little cheating); The Glow Must Go On (audience voted which tracks to play!). [Blog post]

I’m very happy to see h still uses my shot of him as his Instagram avatar.

Marillion’s North American tour brought them to Toronto’s Opera House in June 2012. The thing I remember most about that gig was that it was ridiculously hot and the band kept handing out bottles of water. [Blog post] [Photos] [setlist]

A few months later (March 2013) the band were back in Canada. Another 3-night Marillion Weekend at Théâtre L’Olympia, Montréal. The themes were: Radiation; Brave; and Sounds That Can’t Be Made. [Blog post] [Photos]

For 2015 the Marillion Weekend in Montréal opened with the band playing Montreal… except something went bang and they had to abandon it! The rest of the first night was Anoraknophobia with This Strange Engine and Gaza as the encores. Saturday night was Marbles; there was “Swap the Band” on Sunday afternoon and then the “Singles night” going right the way back to the early days.
[Blog post] [Photos]

Just over a year later (October 2016) there was a world tour in support of their new album, FEAR. (I didn’t take my camera because Danforth Music Hall said they weren’t permitted.)

2019: we’re in Montréal again for the Marillion Weekend. I don’t remember the nights having distinct themes, although Sunday was mostly from Happiness Is the Road. There was no support band on Sunday; instead there was “An Audience With Marillion” which was a lot of fun.
[Photos]

Then came COVID. They organised a “Couch Convention” for September 2020 that included 3 nights of gigs streamed to YouTube: Marbles in The Park, All One Tonight, and Brave Live. There were also lots of games, interviews, and other fun activities, as well as videos from band members’ solo projects and some acts which have supported Marillion in the past.

The next Marillion Weekend in Montreal is scheduled for May 2023.

So which albums have I seen them perform?