After a damp Qualifying and some quick laps in the dying seconds of Q3, the grid wasn’t what some people expected. Since then there have been some more changes due to penalties:

Tyre compounds: prime = hard (orange lettering), options = medium (white)
As the cars sit on the dummy grid we can see only ALO and RAI are starting on primes

01/52: Good start from BUT – up to P2
HUL dropped back to P6!
Contact! RAI and MAS at least involved
Safety Car deployed immediately
MAS is struggling to get his Williams back to the pits – rear left puncture
RAI is out of his car but hobbling!
Red flags – race stopped

Replay shows RAI run wide coming out of Aintree; well off track; bounced off the kerb as he rejoined the track; spun around and everyone tried to avoid him

Cars have reformed on the grid, except CHI in pits
Williams mechanics taking a good look at MAS’ car – looks like a lot of damage
MAS is out of the car and they’re pushing it into the pit lane
Marshals still busy cleaning up the debris
Replay shows PER involved in an incident, which is why he dropped from P7 to P19 on that first lap
No restart time as yet
Race control: guard rail repair necessary; next update in 15 minutes (13:30 local time)
Some tyres changes while they sit on the grid – PER and GRO switched to primes, ALO to options
Replay of MAS’ start shows he had problems getting off the grid – he was dead last going in to the first turn

BBC report update from the medical centre: RAI has no broken bones but they are going to x-ray his ankle
FIA report Ferrari say RAI asked “Is Felipe OK?” after his accident
Turn 1 incident involving cars 25 (VER) and 11 (PER) under investigation – causing a collision

Restart order behind the Safety Car will be: ROS, BUT, MAG, HAM, VET, HUL, RIC, KVY, BOT, CHI*, BIA, SUT, GUT, ALO, MAL, ERI, GRO, VER, PER, KOB
*CHI is still in the pit lane and will probably pick up a penalty

Incident involving cars 25 (VER) and 11 (PER) under investigation – no further action warranted
Drive through penalty for car 4 (CHI) – entering pit lane after race was suspended
Race control: race will be resumed at 1405 local time

04: ROS fastest lap 1:38.609
HAM closing on BUT
Easily down the inside of BUT for P2
CHI serves his drive-through penalty
ALO past GUT

08: Radio from RIC – trouble with overall grip
Incident involving car 14 (ALO) under investigation – out of grid position on original start
Why has it taken over an hour to discover this?

12: Incident involving cars 13 (MAL) and 21 (GUT) under investigation – causing a collision
Sparks from ERI’s car – suspension failure? – limping back to the pits
ERI pits; pushed into the garage

13: Radio for ROS – fuel is on target but no excess
Race control: 5 second stop/go penalty for car 14 (ALO) – out of grid position

16: ALO dives inside MAG to take P5
RIC pits
Incident involving cars 13 (MAL) and 21 (GUT) will be investigated after the race

21: BUT holding off ALO
Radio for ROS – continuing to look at (gearbox) problem
RIC all over the rear of HUL; uses DRS to take P8

23: BUT still ahead of ALO
Radio for ROS – instructions to change gearbox settings
Radio from HAM – tyres starting to drop off

24: ALO lining up BUT but not close enough to attack
SUT pits from P10

25/52: HAM pits from P1; slow stop – 4.1sec; left rear was a bit slow
Radio from BUT pointing out ALO running off track at Copse
MAG tries to defend but VET cuts inside to take P6

26: Radio from HAM – let’s have a good one (pit stop) next time
ALO pits and serves 5sec stop/go penalty
Black and white flag for car 14 (ALO), presumably for repeatedly going off track

29: ROS having gearbox problems – stuck in 5th gear
HAM blasts past to take P1 and lead his home grand prix
BUT pits
ROS slowing; trying to reset things and get back to the pits
ROS pulls off track

31: Radio for HAM telling him to look after his car
BOT 23sec behind HAM and yet to pit

33: Radio for BOT telling him VET is on 21 lap old tyres and will need to stop again

36: KVY pits
VET hanging on to the tail of ALO

37: VET alongside ALO – clean battle but ALO stays ahead

38: Radio from VET whining that ALO nearly hit him

39: Radio from SUT – “what’s going on with the brakes again? How can I race like this?
ALO runs off track again; got to get a penalty soon

44: Radio for MAG urging him to close up on the ALO-VET battle

47: ALO and VET both run wide
VET looks around the outside

48: Side by side, inches apart; VET finally makes the pass on ALO to take P5 but then runs wide

49: Radio from ALO complaining VET using DRS in an area where he’s not allowed to do so

51: Radio from VET – asks about his brakes; “I can smell something”
MAL pulls off track with smoke from his engine

52 = final lap: Radio for HAM – exercise caution as they may be oil on track (due to MAL)

HAM takes the chequered flag, 6 years to the day since his first British GP win
HAM is driving off track, seat belt undone, waving to the crowd
BOT over the line in P2
RIC just 0.8sec ahead of BUT

On the podium, Lewis pointing up at the British flag as the national anthem plays 🙂
Bit of a pathetic trophy though
Good to see John Surtees presenting a trophy
David Coulthard interviewing the top 3 drivers
Lewis points out his trophy is already falling apart!

Tyre compounds this weekend: prime is soft (yellow band) and option is super-soft (red band). Practice 1 SP is in the Sauber, having recovered from his accident at Monaco two

Hopefully Mercedes have fixed the bug in their pit stop calculator which cost HAM the win in Australia, and that Haas have resolved the wheel nut issues which put both 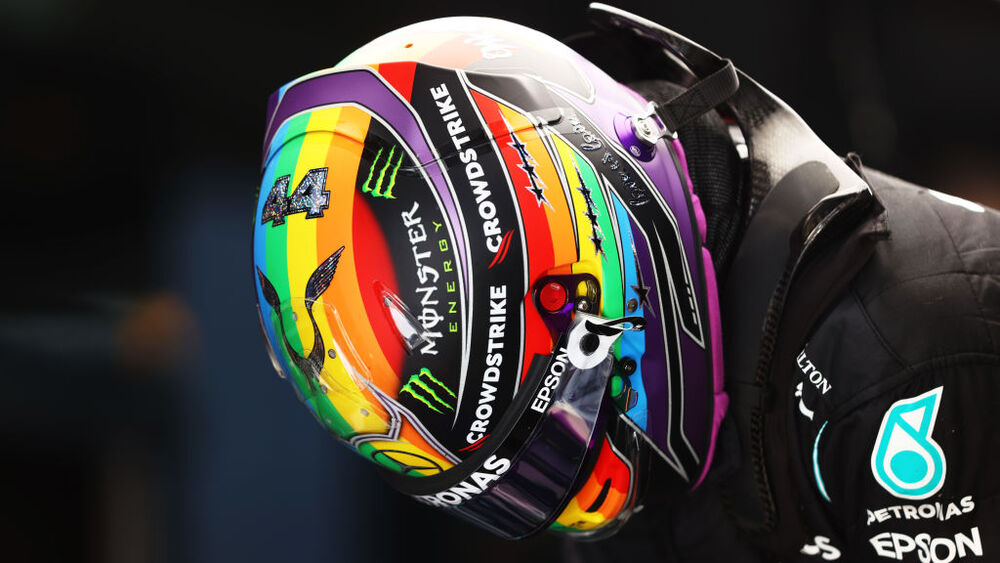 The third race of the triple-header is (controversially) in Qatar – a brand new circuit for F1 but it has hosted many bike races. Mexico and Brazil were exciting, especially